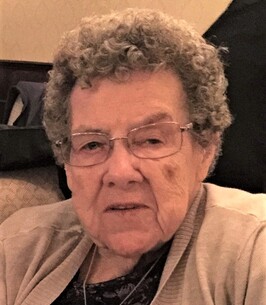 COHOES Margaret “Peggy” Murray, 89, entered into eternal life Monday, July 25, 2022 at Samaritan Hospital surrounded by her loving family. Born and educated in Troy, she was the daughter of the late Thomas Powers, Sr. and the wife of the late Francis Murray, Sr.

Peggy had been employed at the Troy District Shirt Co. and then at Roxy Cleaners until her retirement. She was also a communicant of the Church of the Holy Trinity in Cohoes.

Peggy loved her family very much and was known as “Queen Mum” by her family. She hosted family reunions every year and hosted family card night every Friday. One of her favorite things to do was to go to the Saratoga Racetrack. She will be missed by many.

Peggy’s family would especially like to thank Dave Belanger for his love, care and compassion. They would also like to thank the 6th Floor Nursing Staff at Samaritan Hospital for the great care they provided their mother.

Funeral services will be held Monday at 9:30 a.m. from the Fitzgerald Funeral Home, 105 Vliet Blvd, Cohoes and at 10 a.m. in the Church of the Holy Trinity, Cohoes. Interment will follow in St. Joseph’s Cemetery, Waterford.

Relatives and friends may visit at the funeral home on Sunday from 3-6 p.m.

In lieu of flowers, donations may be made in Peggy’s memory to St. Jude Children’s Research Hospital, 262 Danny Thomas Place, Memphis, TN 38105